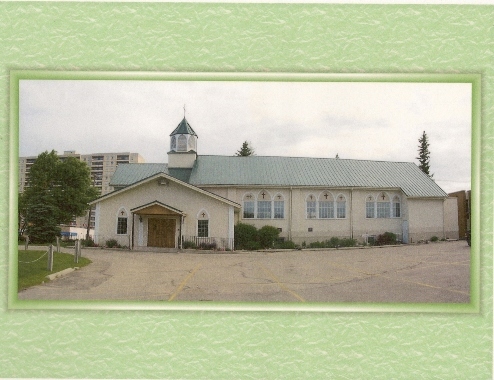 • In 1907 St. Andrews began as a mission church of St. James and in 1910 a small frame church was built on the south side of Portage near Moray Street.
• In 1912 this building was moved to property (2 lots) on Wallasey Street.
• In 1947 the two lots on Wallasey were exchanged for 2 lots on Portage Avenue and a new church was built on the Woodhaven site with much of the work done by the parishioners and Reverend Thain. The three stained glass windows, communion table, organ and brass plaque all in memory of the Reverend Tom Marshall were transferred to the new church. Other memorials were: a lectern in memory of Hilda Gertrude Saul, two Hymn Boards in memory of Thomas Wilkinson, a prayer desk and chair in memory of T.H. Gibbs, baptismal font in memory of Ernest and Maud Stutter, an altar rail made by E. Goswell, an honour roll naming those who had served in World War I and two brass plaques in memory of Roderich Alexander Bannatyne and Basil Ward Guilbert who had died in the war. Pews were brought from the old church plus new pews were ordered.
• In 1950 the oak pulpit, hand carved by R. Gibbs, was used for the first time at a Service of Consecration. Also in 1950 the Church of England in Canada changed its name to the Anglican Church of Canada. St. Andrews Women’s Auxillary purchased the lot beside the church to build a rectory which was completed in 1954.
• In 1962 the Parish Hall was completed under the initiative of Reverend Stan Whitehouse and the guidance of parishioner Ken Harris.
• In 1974 the Parish Hall mortgage was paid off in February and Reverend Whitehouse was made an Honourary Citizen of Winnipeg. A fire was set by an arsonist in the Parish Hall in August yielding extensive smoke damage.
• In 1985 an extension to the west end of the church was built and new stained glass windows installed (donated by the ACW, Matheson and Lillie families).
• In 1995 the rectory was sold and moved off the property.
• In 1999 the Prayer Garden was created under the guidance of Pat Coleman.
• In 2002 extensive renovations were made to the Parish Hall kitchen.
• In 2006 a new Phoenix organ was purchased to replace the 1979 Allen organ.